Treat yourself to a tour and tasting at San Francisco's oldest traditional brewery.

This is a really fun San Francisco thing to do. The charming Anchor Steam Brewery hosts tours twice a day and escorts you through the three floors of their operation, finishing off with an opportunity to taste about 7 of their beer varieties. 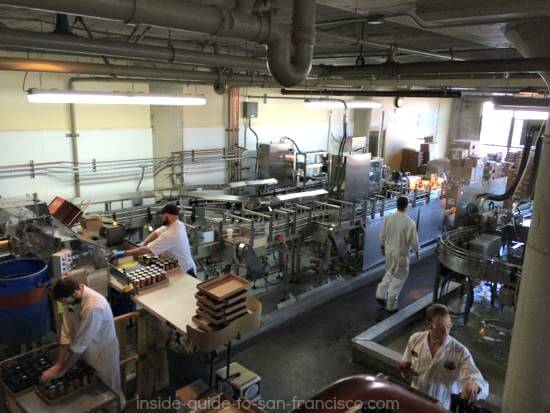 The Anchor Steam Brewery goes all the way back to the Gold Rush era, when founder Gottlieb Brekle arrived in San Francisco.

Founded by German immigrants in 1896, this brewery still makes its beer in essentially the same way as it was done in the old country a hundred years ago. 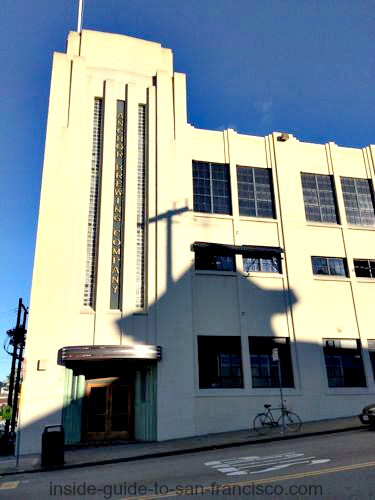 The tour guide fills you in on the turbulent history of Anchor Steam in San Francisco, while taking you through all the stages of the beer-making process. 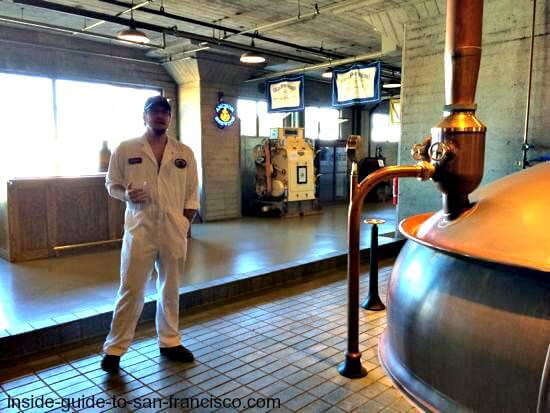 This is one of the original "artisanal" breweries, existing long before microbreweries became trendy. It had such a rocky history, it's almost a miracle it's still here: owners run over by street cars, building destroyed in the 1906 earthquake, shut down for 13 years during Prohibition, etc.!

It almost went under again when American tastes shifted to cans of Budweiser and Pabst Blue Ribbon, but it came back big time in the 1970's, when a demand for flavor and variety reappeared.

Their brewing process is very natural one. Only four ingredients go into their beers; malted barley, hops, water and yeast (with some malted wheat added to their wheat beers). The cooling of the boiling malt and hops mixture is done by the cool, San Francisco air (hence "steam beer", as the steam rises from the cooling tanks). 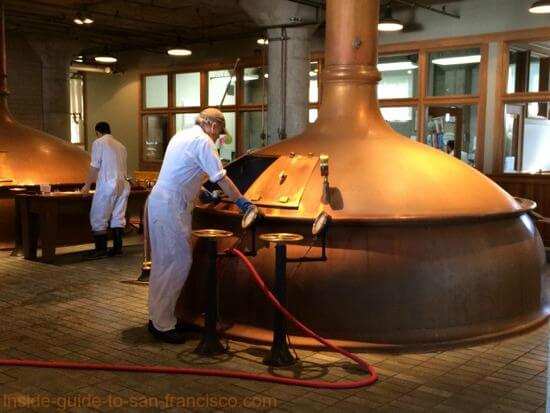 Boiling the Malt and Hops

The brewery is small and has a friendly, family feel to it. You tag along behind the guide, up and down stairs, peering at vats of soupy malt, sacks of feathery hops and beautiful copper kettles boiling the mixture.

Even their office has old-fashioned wooden desks and bookcases, transporting you back to the 1940's. 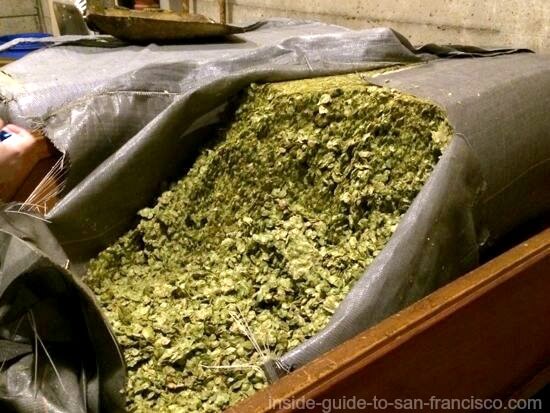 Only the dried flowers of the female hops plant are used. 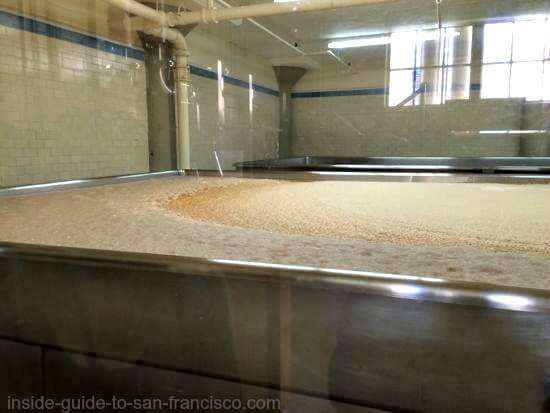 And then the grand finale. Back to the cozy taproom to taste about 12 of their varied brews. 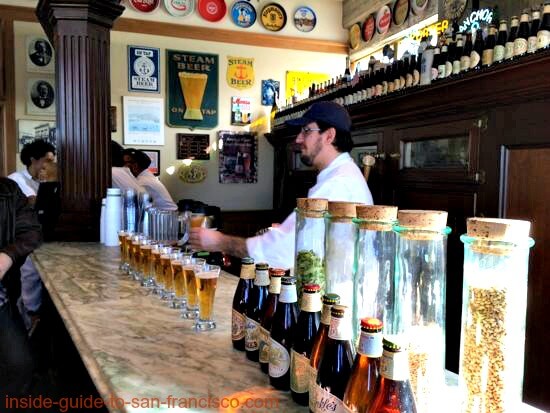 Note the size of the "tastes"

They are generous with their tastings. And there is no rushing you out the door. We found it very relaxing and hung out there probably an hour or more after the tour. 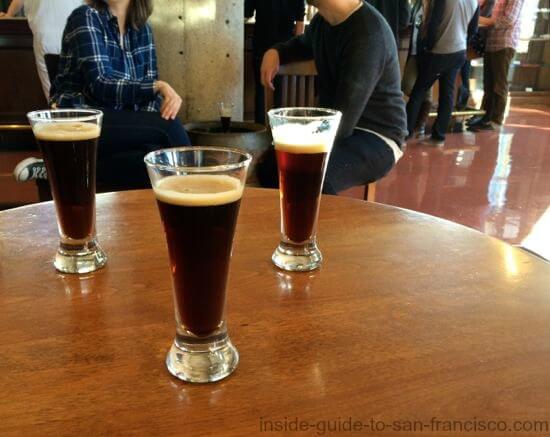 Reservations are not required, but it's better to have a reserved spot (make them online through their website, anchorbrewing.com).

Note: the factory only runs Monday through Friday, so if you want to see it in operation, book on a weekday.

The tour lasts one hour. 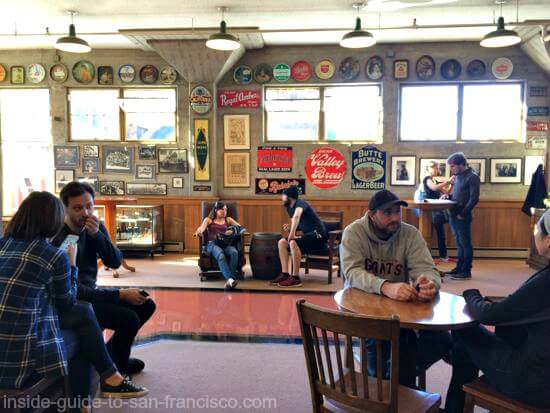 Waiting for the Tour

Anchor Steam has a stable of current beers, some year-round and others produced seasonally and available for just a few months a year. In addition, they produce some interesting, one-time, specialty beers from time to time, like Sumerian Beer (based on a 4000-year-old recipe) and Earthquake Beer, after the 1989 quake.

There is a good description of each of the beers on their website and a nifty search system to find out which stores and bars nationwide sell Anchor Steam beer, and precisely which versions are available at each location: Anchor Steam Beers.

I tried their Anchor Saison Spring Ale, available in February, March and April each year. It's a Belgian-style ale made with a type of yeast that gives it what they describe as a peppery flavor, plus they add in an interesting mixture of ginger, lemongrass and lemon peel. Has a refreshing bite to it, very nice. 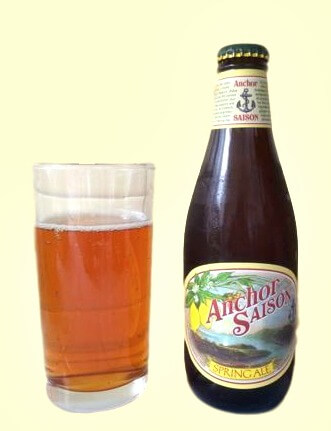 The Anchor Steam Brewery is located at 1705 Mariposa Street, in the Potrero Hill neighborhood. The entrance is on De Haro Street, at the corner of Mariposa. 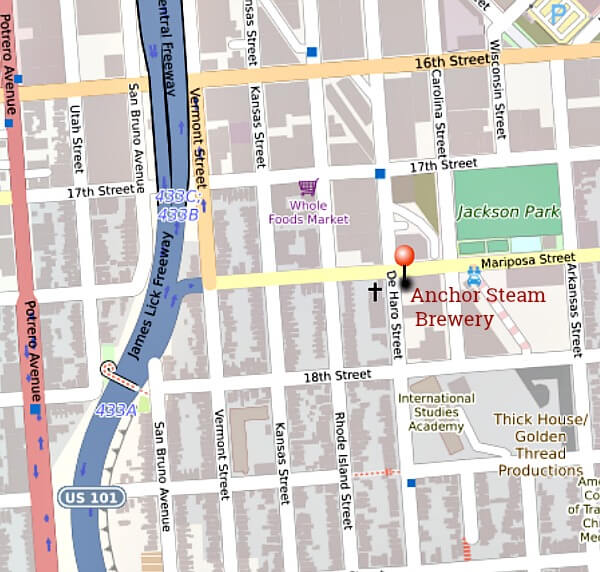 Use their address, 1705 Mariposa Street, for navigation.

There is no parking lot, but you can park on the street. You may have to walk a block or two, but it's usually pretty easy to find a place nearby.

Even though it's in a totally different part of San Francisco, it's actually pretty easy to get over there from either Fisherman's Wharf or Union Square.

From Fisherman's Wharf: Catch the 19-Polk/Hunter's Point Bus on Bay Street near Polk Street (near Aquatic Park on the Wharf.)

Here's a link to the Muni 19-Polk map and schedule.

Covid note: these tours were fun ways to explore beer in SF, but stopped running when Covid arrived. Hopefully they will start up again. You can check them to see if they are back.

(Note: I may earn a small commission if you make a purchase through the links below, at no extra cost to you. This helps me provide all the free information I post on this website. Thank you for your support!)

Here are several guided, beer-tasting tours to check out: 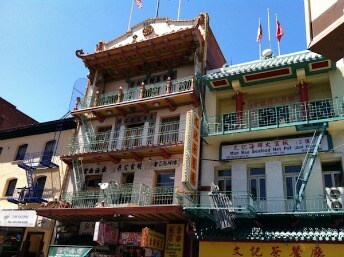 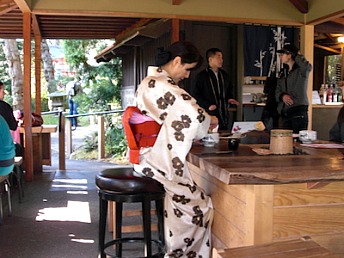 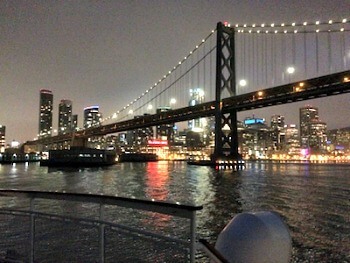