The night tour has been voted the best tour of Alcatraz, and it books up even faster than the day tour. So, how much better is the night tour, and should you make an effort to get night tour tickets?

COVID note: Alcatraz Island is open again, including the Day Tours, Night Tours and Behind the Scenes Tours. The cell block is also now open for the audio tour.

In many ways, it's pretty similar to the day tour. But as the sun starts to go down, and the crowds thin out, it takes on a magical quality not present during the daytime.

I'd been out to the Rock many times, but seeing it at night had a very different feel; the prison was eerier and the island more charming somehow.

Plus, it was cool getting to see areas not open during the day and hearing stories about the prison and its inmates from the park rangers. 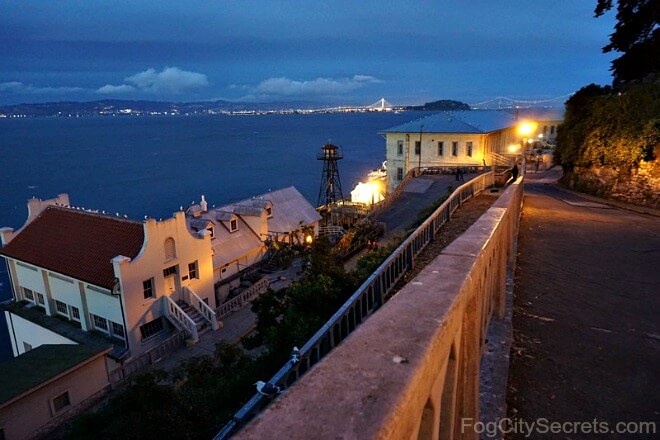 Included in the night tour:

Visitors are also able to explore areas outside the prison, including the Civil War buildings, gardens and the area around the lighthouse and ruins of the warden's house. 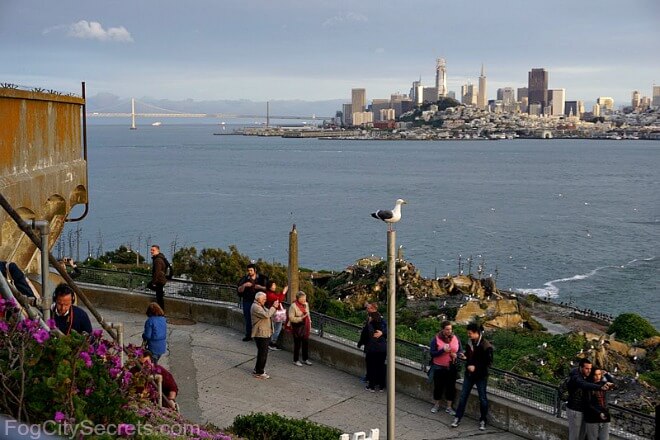 There is also an interesting film about the history of Alcatraz, shown in the theater on the dock, which you can watch before or after the tours.

How the tour works:

Normally, the ride out to the island takes about 15 minutes, but on the night tour, the captain sails around Alcatraz before docking on the island.

On the trip out, there's a live narration about the history of Alcatraz and what's available on the island, but I have to say it was pretty hard to hear it over the noise of the engines.

It's fun seeing all sides of Alcatraz, which you don't see on the day tour. 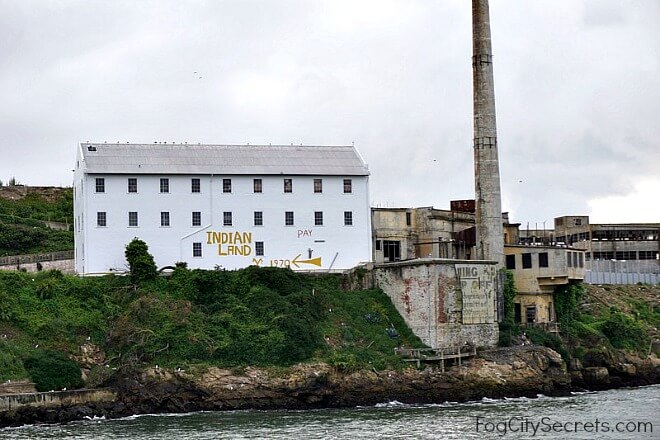 When the boat arrives on Alcatraz, the passengers are divided into three groups so that the entrance to the cell block is staggered.  The first group is assigned a guide, who gives a brief intro talk, then leads them up the hill.

On the way up, the guide gives a presentation about the island and what to expect on the evening's tour. Then the first group enters the cell block and gets their audio gadget and headset to do the self-guided exploration of the prison.

Same process for the second and third groups, so they don't all arrive at prison at the same time.

The tram is also available on the night tours for visitors with difficulty walking up the steep hill. They run about every 30 minutes, and meet the ferries at the dock.

When you enter the cell block at the top of the hill, you'll find yourself in the prisoners' shower room, where the audio tour gadgets and headsets are handed out. You can choose from English, French, German, Dutch, Italian, Spanish, Portuguese, Russian, Japanese, Mandarin and Korean.

When you get your audio device, you are directed to a sign near the entrance to the cell block which says Tour Starts Here and told to turn on the recording. The whole audio tour lasts 45 minutes.

The gadget is delightfully simple: red and green buttons. It's either going or not going. Beautiful! You can pause it any time, and rewind or fast forward. You don't have to put in a number for a location like in many museums.

The audio narration tells you where to go and plays recordings of actual prisoners and guards from Alcatraz telling their stories.  You'll hear the sound effects of the shoot-outs, clanging doors, etc. Very well done.

Tips for avoiding the crowds...

Even so, I found the crowds pretty intense, because the corridors are not that wide, and everyone in the group is trying to see the same cell at the same time. 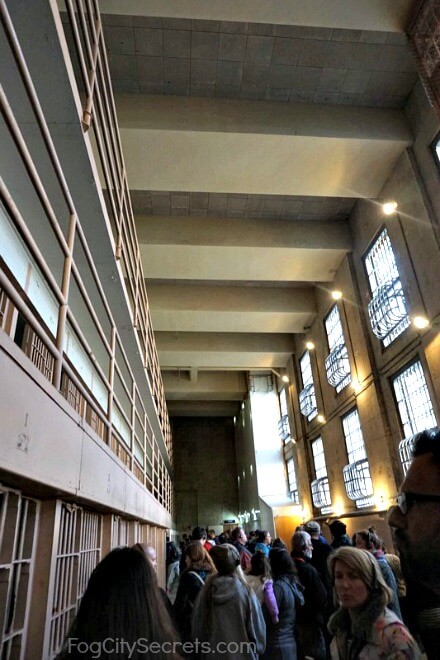 Rather crowded in cell block halls

One solution: (which I didn't think of until later)... be one of the last ones off the boat to be in the third group. Then once you get into the cell block for the audio tour, hang back and let the group start ahead of you.  Start your audio tour after most of the group has moved on.

Otherwise, you may find yourself waiting for a turn to see each place on the tour and trying to peer over people's heads.

Another idea: head outside when you first get to the cell block, explore the island, then come back inside after 7:30 pm (summer schedule) when the visitors on both boats will have finished their audio tours.

Here's what the corridors look like later in the evening (after 7:30 or so) when most people are outside. 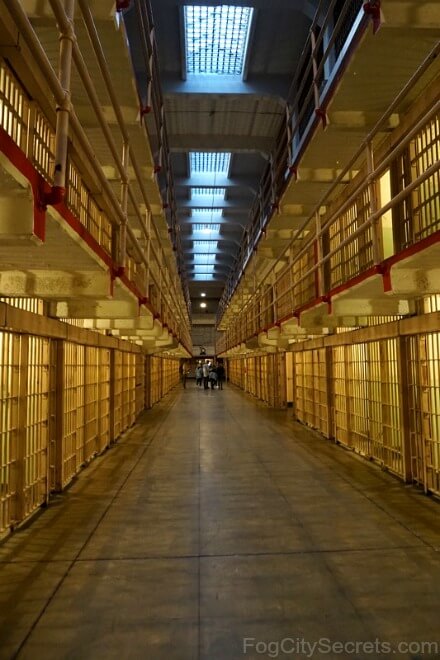 It's really cool to wander through the prison when there's hardly anyone around. You can go into the open cells and explore on your own; it's a bit haunting and you can get a better feel of the prison atmosphere. 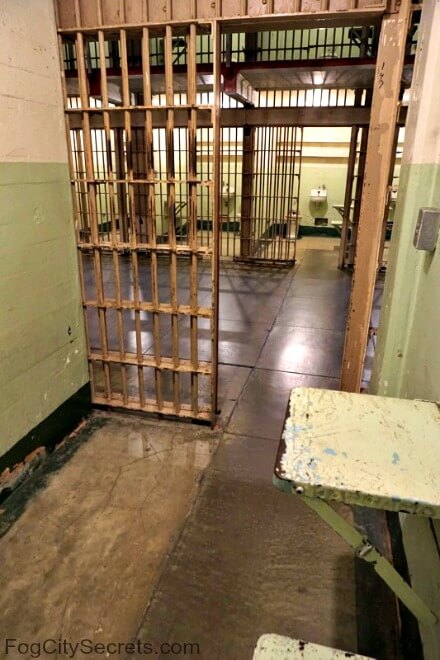 The night tour gives you a choice of extra guided tours to areas not normally available during the day. It used to include the hospital, but they're doing repairs on it at the moment, so you'll see other areas like the second floor cells and A Block which is usually closed off.

On one of our night tours, there was a guided tour of areas associated with Machine Gun Kelly.

There are also extra lectures on various topics. For our first night tour, there was a talk on the lives of the guards and families, and another one on a notorious kidnapper sent to Alcatraz. Tidbit: kidnappers of rich tycoons were looking at $250,000 in ransom money, quite a haul in the 1930's.

The guide announces the times for these tours during the trip up to the cell block, and they are also posted in the building, near the prison entrance and in the bookstore/gift shop in the prison building. 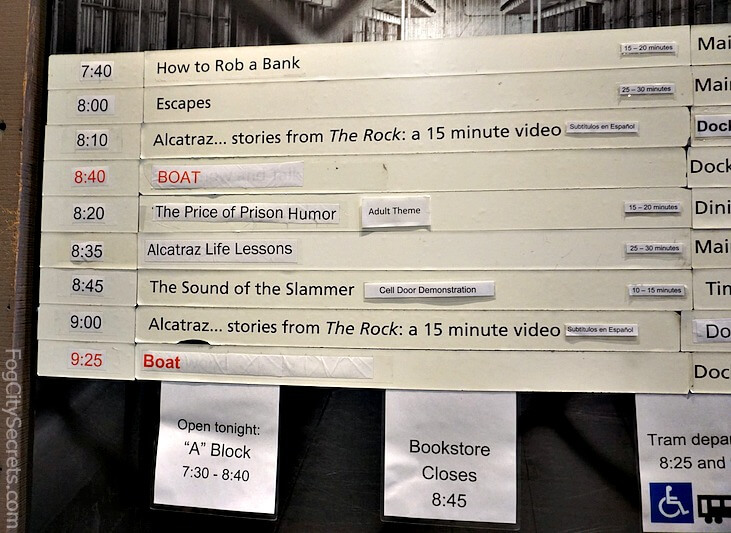 Evening programs posted in the bookstore

Exploring outside the prison.

When you finish the audio tour inside the cell block, you can head outside to the area where the Alcatraz lighthouse sits. From there, you can see the ruins of the warden's house and can follow the paths down to other areas of the island. 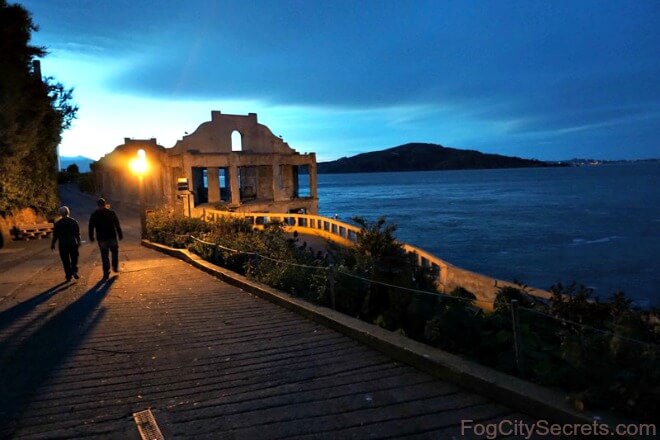 Other things to see: buildings from the Civil War era, gardens, and nesting areas for birds.

If it's a clear night, the views of the city and the Golden Gate Bridge are spectacular as the sun goes down. 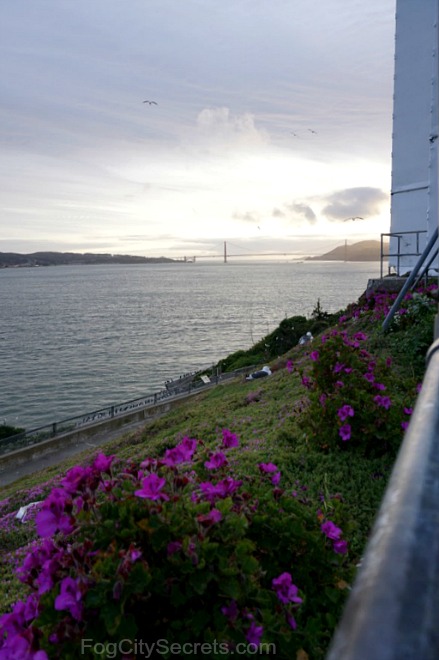 Note:  There's been a fair amount of construction going on at Alcatraz for the past couple of years to repair the damage done by decades of salty air, but it's winding down now.

Consequently, certain areas may not be accessible on the night tour, depending where repairs are being done at the time. But most of the areas normally open on the tour are available now, including the prisoners' exercise yard.

Alcatraz is a major nesting site for large numbers of sea gulls, snowy egrets, cormorants and other sea birds. It's not so obvious during the day, but as the sun goes down, the resident birds come in for the night and the numbers are impressive.

The squawking of the gulls and flapping of all the wings makes you realize just how many are living on the island.

The birds are building nests and laying eggs in April and May, and the chicks are born in June. There's a good map that shows their nesting areas on this Park Service publication.

Very few birds lived on Alcatraz while it was a prison (the Bird Man didn't keep any birds while he was here; that happened in Leavenworth).

The cormorants spend their whole lives out on the open ocean and only come to land during the spring to nest and raise their chicks. 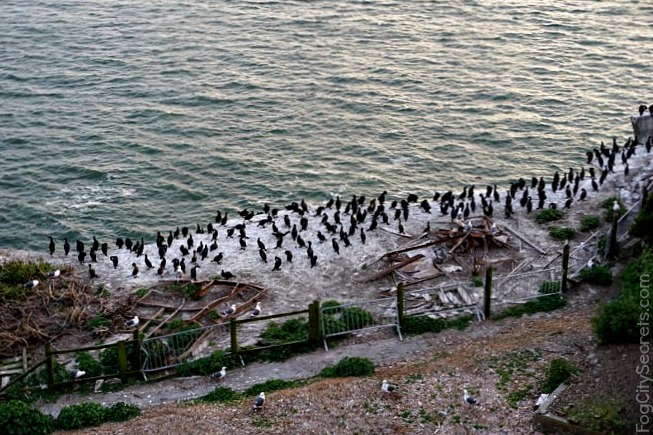 Note: I may earn a small commission if you make a purchase through some of the links on this page, at no extra cost to you. This helps me provide all the free information I post on this website.

Tickets for the night tour

As the length of daylight changes during the year, the departure times change as well. The night tours run 5 evenings a week, year-round.

Currently the night tour runs Tuesday through Saturday, with one sailing each night; departures are at 3:50 pm. In summer, the tours leave twice a day.

The return times also vary with the seasons; they're posted at Pier 33 and on the dock on Alcatraz. At the moment (winter 2022), you can return on any of the boats, starting at 4:25 pm, but the last return boat is at 6:40 pm. But check the notices.

It can be a challenge. Alcatraz night tour tickets are the toughest to get because there are a lot fewer of them.

By mid May, they are usually sold out two months in advance, often almost three months, and aren't included in most of the combination tours. But now there are a few packages that include the night tour! See night tour combos below for a list.

Winter is easier; you can probably snag some night tour tickets just a few days away.

More info on the Behind the Scenes tour.

There are ways to get night tour tickets even if they're sold out for the day you want.

Here are three ways to score tickets for sold out days:

Note: the night tour combos aren't available at the moment, post Covid, but I've left them up so you can find them when they return.

Another option: do the night tour together with another activity, in a combination package.

This is one of the ways of getting those hard-to-get night tour tickets when they're sold out.

Until 2018, it wasn't possible to find a combination deal that included the Alcatraz night tour, but now there are a smallish number of them.

Here's a selection of some Alcatraz Night Tour combo packages:

Alcatraz Night Tour & Yosemite. See Alcatraz at night, then do a full-day bus tour the next day to beautiful Yosemite, with several hours free time to explore the park in addition to the tour. Plus, a ticket for the Aquarium of the Bay at Pier 39. $269. See Night Tour & Yosemite for info and booking.

Otherwise, you can book a Day Tour by itself or a Day Tour combined with other San Francisco attractions, like the popular Alcatraz/Muir Woods/Sausalito Tour, or the Alcatraz/Hop-On Hop-Off Bus city tour.

There is currently just one return boat to get back to the city, so don't miss it!

Return times vary by season. In summer, the return boat leaves at 8:40 pm, but winter departure is at 6:40 pm, so be sure to check the signs for the current times.

They blow a warning horn and do a search of the island each night before the last boat leaves to make sure there aren't any overnight visitors!

It was pretty dark by that time, but Alcatraz is well lit at night, so finding our way back down to the dock was easy. In mid-summer, you'll have to take the last boat back to see the city lights. 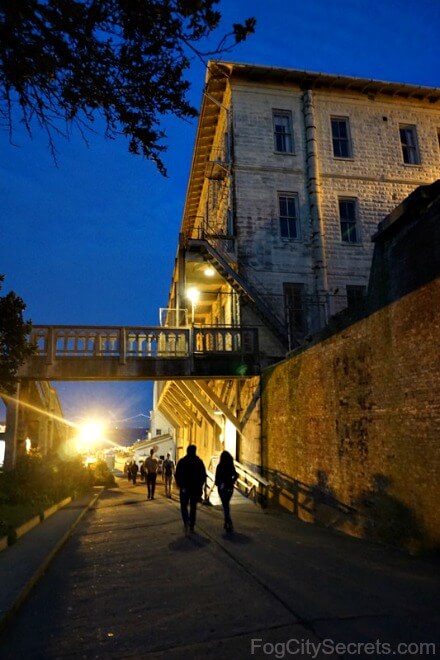 Back to the dock

It was so pretty out on the island with the lights of the city sparkling in the distance. And Alcatraz seemed more intimate and magical after dark; not at all scary, but very welcoming and friendly. Almost like being on a private island. Highly recommended!

For information on the other Alcatraz tours available, see Alcatraz prison tours.

For more tips for visiting the island,  including where to catch the ferry, transportation and parking, see visiting Alcatraz.

Is Alcatraz sold out, for both the day and night tours? See my suggestions on getting the tickets. 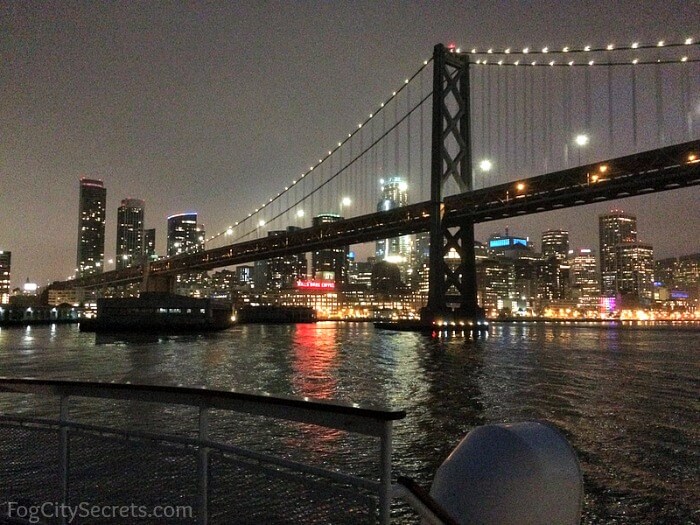 If you want to experience the city lights at night from the bay, Hornblower Yachts has a fun dinner/dance cruise.

We had a great time on it. See my dinner cruise page for info and photos, or book it here. 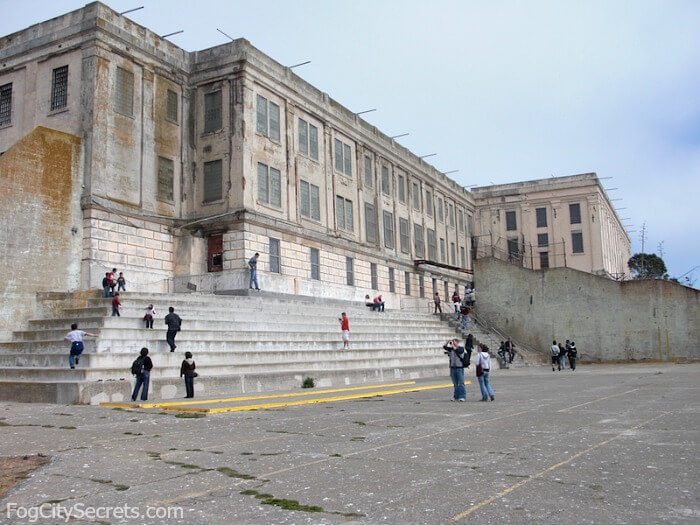 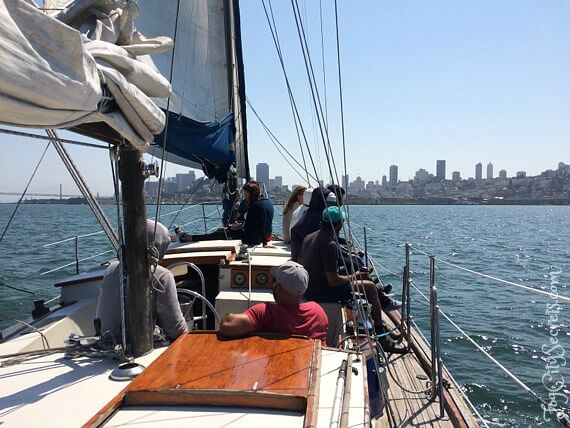 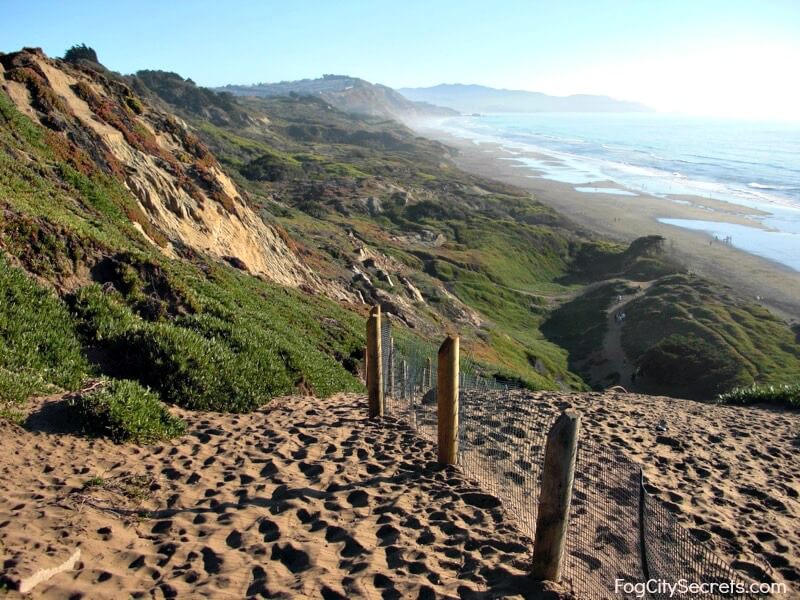 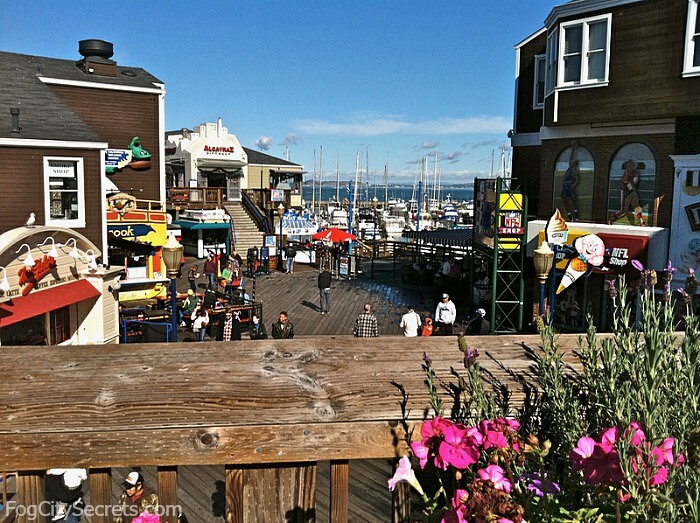